A Square of Lettuce Goes a Long Way 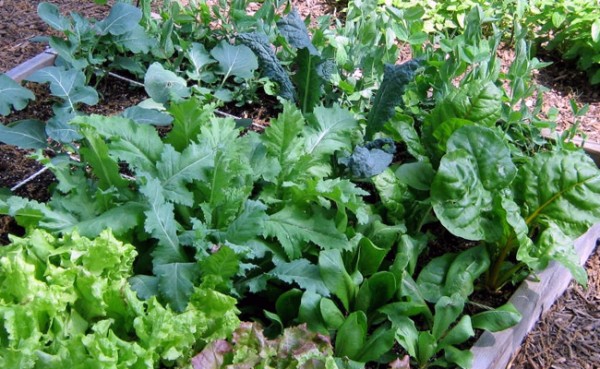 Lettuce in a SFG

First of all, thanks to Kim Drissell over at 3 P’s and Q for sending me a picture of her wonderful lettuce.

How many lettuce plants can you grow in one square foot? With most varieties the answer is four. If you grow your seeds in four packs and then transplant the seedlings into your garden, you could start harvesting lettuce in a little over a month and can continue for an extra month harvesting until the weather changes.  The nice thing is you can do that twice a year in most areas of the country. With protection from either the heat of the summer or the cold of the winter, you can grow lettuce outdoors year round.

Let’s take that one square of four lettuce plants and set it next to one square of sixteen radishes that we talked about in my post about radishes and world hunger. That’s when I suggested that if one of our billionaires donated a tiny portion of their money we could distribute a garden box for every family in the world and they could grow a crop for the rest of their lives in that same box.

Instead of free food in those boxes, what if there were garden boxes with Mel’s Mix and a small packet of seeds?  Just by starting with one garden box of radishes next a garden box of lettuce, nine beets, nine bush beans, four Swiss chard, and one pepper plant they would have a bountiful harvest at the end of six months or a year.

We would no longer have to ship food to the hungry because they would have learned to have their own garden and become self-sufficient and independent. Who’s the winner in that scenario? Why can’t world leaders see such a simple and uncomplicated solution?  I’d love your comments.