Cheap Solution for the 3rd World 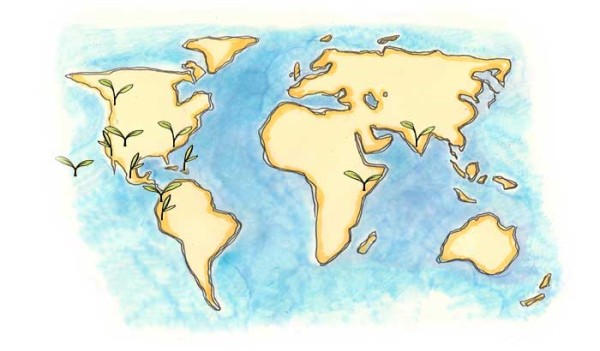 If you haven’t checked out Part I, do that now!

Let’s look at the neighborhood improvements. What do we see? It’s cleaner, neater, tidier, and everyone notices something is going on here. Instead of kids loitering about getting into trouble by forming gangs – perhaps even stealing and causing graffiti and destruction of property – they are learning to be better citizens and understanding what community living is all about.

Let’s fast forward a few weeks and we see them now building boxes. In their scavenger hunt they have already looked for box material for both the sides and perhaps even the bottom. By borrowing a hammer and saw and screwdriver they can easily build several boxes from free material and be ready to fill them as soon as the compost is ready.

Next would be adding the grid which they realize is a very important part of this new square foot system. Now they need seeds. Not packet after packet, but just a few seeds of each plants varieties that they want to have. Here in this country we tell people to add your pinch of seeds and then place the remaining packet in the refrigerator to keep  them cool and dry. And interesting thing happened in one of the countries when we suggested this, the children asked, what’s a refrigerator? And the mother said, “We don’t have electricity”. But there’s even a way there.

We found that the packets could be put in a discarded glass or plastic jar with a screw lid and buried or sunk into a small hole dug down at least a foot to two feet deep. Rather than backfill a wood or metal cover can be used to prevent someone from stepping in the hole. And the end result is the air in that jar will be drier than the outside air especially if it is very humid and of course when it rains. And the temperature two feet in the ground will remain fairly constant and will not overheat.

After the planting, of course, comes watering and any minor weeding.  Although the compost pile heats up enough to kill all of the weed seeds. The children are kept busy collecting materials for the compost pile because that is a never ending project.

One interesting thing that attracts everyone’s attention and desire to participate is to tell them that finished compost is like a cash crop. And the best part is that it won’t go bad as it sets there for a buyer. Every country in the world has people that can afford gardens and fertilizer and grass and maybe even a gardener and the most desirous thing in every country is to be able to buy finished compost. So that keeps everyone busy, involved and continuing the compost operation.

You might ask “What if everyone in the neighborhood starts composting and there is a shortage of thrown out material, then what?” Wouldn’t that be wonderful! Success on a grand scale. Let’s not worry about success and let that discourage anyone from trying this program and method. Going back to the garden, as the seeds sprout and the plants grow, there will soon be time to start harvesting. The compost bins are working. More boxes are being made. And suddenly someone in the family says, Hey, could we sell these boxes with our without compost soil. Or perhaps even all planted. Even sprouted and ready to harvest boxes.

Meanwhile down at the corner tavern, a man is telling all his friends how successful his family is now that he’s having them do all this gardening and small nursery business. At first everything seemed small scale and insignificant. Didn’t cost any money. Kept the kids out of trouble. So it was no threat to what his wife was doing to him. And he was able to give his approval to whatever they wanted to do.

It would be nice to imagine the ending to this story but hopefully it will spread and continue to grow and even spread to other villages and other countries until the world is covered with small back yards filled with boxes of pretty flowers, healthy vegetables, and tasty herbs. All consumed by that family who are now healthier, brighter, and kids have now picked up interest in school, pay more attention, and all have found a common cause, become more independent and self-sufficient.