Put Your SFG Close to the House 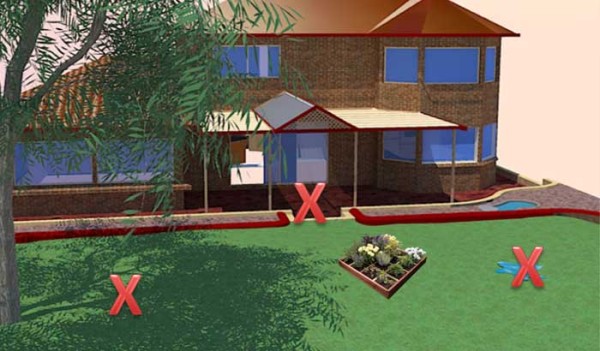 Where do you find most people’s gardens, especially the vegetable gardens? Usually, they’re way out back! Why way out back? Well, first of all, traditional row gardens take up so much room, and so much tending and work, you don’t watn to see them all the time, you don’t want to be reminded of what’s out there and what needs to be done.  In the summer they become so unsightly because they’re overcome with weeds. You just don’t have time to get rid of all those weeds, and they grow like crazy.

Why? Well, first of all, you probably fertilized the whole garden area and then you went back and put in single rows of plants, but all of the three foot wide aisles are also fertilized, and most people when the water have some sort of a system, either sprinklers or spraying with a hose, or in some parts of the country they even irrigate. That means they flood the whole garden. Well, what percentage of that soil and garden space is needed for just the plants? Very little, ten to fifteen percent. The rest is all aisles and wasted space. But, they still get watered and they still get fertilized, and that’s where the weeds will grow.

So, who wants a big, ugly, weed-filled garden near the house, or even within sight? That’s why they’re located way out back. Actually, you put them as close to your neighbor’s property line as possible, which results in the “out of sight, out of mind” mentality, which helps if there’s a lot of work to be done out there. But, you don’t know what’s going on out in the garden. To go harvest is quite a trip, and it means that you don’t go very often, which is the traditional role of the single-row garden – way out back. It was emphasized back during World War II when the government started promoting victory gardens. And, believe it or not, many, if not most of the experts today are still teaching single-row gardening.

Why? Because that’s what they learned in college and in agricultural school and that’s where all the money is in farming. You need all of the different tools and tractors and supplies based on farming, and it was a trickle down attitude of the agricultural community.  If it’s good enough for the farm, it’ll probably be good enough for the home – but it isn’t. It’s an outrageously inefficient, ineffective, and harmful to the environment type of gardening: both single-row farming and single-row gardening. This is why we should outlaw single-row gardening in the home. There should be at least a penalty if you put one of those ugly single-row gardens in. The other bad result of a single-row garden is that you plant too much because you think, those tiny little seeds, what are they going to amount to? You plant them all at once, and you’re going to harvest all at once, and you end up with too much. I’m not talking about canning and freezing, I’m just talking about daily living with a garden and trying to eat out of the garden.

Well, it’s all over now with the invention of Square Foot Gardening. We have eliminated every single bad point of row gardening. Now we plant intensively in raised beds, but they are limited to four feet wide and any length you want, and you walk around the sides and reach in. You used to do that with single-row, when you reached in or down to the single row, but you had another three-foot aisle on the other side of that single row. Doesn’t that sound kind of dumb? Didn’t anyone ever think, “That’s a terrible waste of space, why do we need a three-foot aisle next to every single row?” You don’t. Now, with Square Foot Gardening, you have a three-foot aisle and you reach into a two-foot wide part of your four-foot wide bed, you walk around to the other aisle, and reach into that.

Instead of having a single-row, you have anywhere from  four rows with plants that are twelve inches apart down to sixteen. That’s a huge difference. So it’s one to four, one to sixteen, one to thirty-six, and one to sixty-four. That means in a row of close plants, like radishes, you can get sixty-four more plants than one in the row system. Isn’t that amazing? Don’t you want to just shout to the world, “Hey! There’s a new method that’s much more efficient!”

Since we can grow so much in such a small area, we can locate it in a difference place. The next huge advantage of Square Foot Gardening is that it contains no weed seeds. Mel’s Mixhas no weed seeds in either the peat moss, Vermiculite or compost. Therefore, we don’t have to worry about weeds. For your aisles, you can either put down weed fabric with mulch over it, or you can just put grass there and just mow the grass. Now your garden stays lovely, picturesque, and very efficient looking. No weeds, can you imagine that?

As one of our book reviewers wrote, “Why isn’t everyone Square Foot Gardening?” That’s a good question. The only answer we can come up with is the same one that the experts told me about row gardening: “Because that’s the way we’ve always done it.” Tradition is very strong, and people don’t like to change. Even though they know it won’t work well, it’s inefficient and looks terrible, they get discouraged by August and say, “wait ‘til next year,” sort of like the Chicago Cub fans, sorry folks, they still keep doing it the same old way. And our teachers keep teaching it the same old way.

Yet there’s a whole bunch of new intensive raised bed methods out there. We think Square Foot gardening is the best.

Concerning all the above, wouldn’t you now want your garden close to your house, and wouldn’t it make a lot of sense? You’re not going to have so much harvest all at once, it’s going to be a controlled harvest.  Alittle bit now, a little bit tomorrow, a little bit more the next day. I like to recommend that people take their salad bowl right out to their garden and a pair of scissors and start picking their salad. Wash it off, squeeze some lemon juice over it, and you have the healthiest, freshest salad you could ever imagine.

Where should you put it close to your house? Well, where you can see it, where you can get to it. First of all, it should be right near your back door. It could even be on a patio or a terrace; whatever’s outside your back door. Also, I like to recommend that you go in the kitchen and look out your kitchen window, and that’s where your garden should be so you can see it all the time.

And, if you do another recommendation of SFG, you put some flowers in your vegetable garden. Why flowers, because they’re pretty. And if they’re pretty, you’ll look at your garden more often; it’ll bring you more pleasure. You’ll go to it, take better care of it, and it’ll produce more for you. It’s just a complete circle – Square Foot Gardening keeps producing and producing and producing, it’s like the Energizer bunny. Since your garden is designed in a number of controlled boxes located outside your back door, you’ll be adding something very beautiful to your yard. Every time you go out the door, you’ll see it, you’ll smile, you’ll notice the flowers, you’ll see if there are any problems and see what’s ready for harvest, so you’ll eat better.

Can you think of any reason why you should not locate your SFG near your back door, right outside your kitchen window? There should be another one outside your front door near your front entrance walk so that everyone can see it when they come up. How many of you have front yard gardens? Some people have run into problems with their HOA saying you can’t put a garden in the front yard. Well the reason for that was single-row gardening, blame it on them again. There were so many weeds the front yard looked ugly, and the neighbors said, “We don’t want people having weeds in their garden.” But with a boxed, Square Foot Garden planted intensively, with the perfect soil, you’re not going to have that problem.

In summary, I’ve laid out all of the major reasons. One more reason is that you don’t have to go to the tool shed, you don’t have to get your feet dirty, you don’t have to get your hands dirty, you don’t need a heavy pair of gloves. It just goes on and on, and remember- we don’t use fertilizer, so there’s no possible contamination for your pets, children, or the local ground water. So think about putting in a new SFG box or two, or three, right in your front yard at your entranceway, and make sure that if you are still stuck in a rut with a row garden way out back, and you’re not sure you want to start SFG, because you can’t believe it could be that easy and simple, try just one box out in your row garden and compare the results. Let me know how you’re doing and let me know some of your thoughts and ideas about this. We of course feel that everyone in the world, and every household should have a square foot garden or a square meter garden, and that’s our goal: to solve world hunger by teaching people how to feed themselves, at least a salad a day.