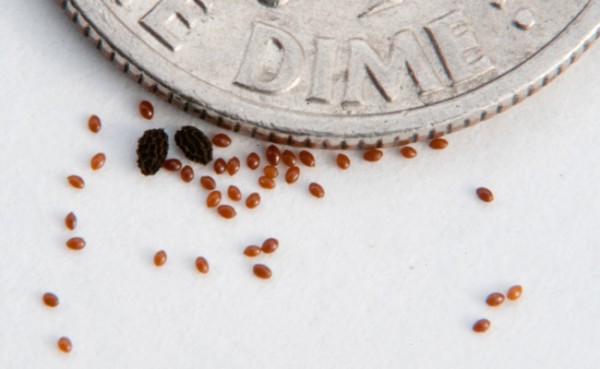 To continue with our Square Foot Gardening series, another major revelation is the fact that you do not have to buy new seeds every year. Now, I know the seed companies tell you, ‘Oh, make sure they’re fresh and get fresh packets every year…” It’s true that if they lay around for a long time in the wrong place, seeds will go bad.

In the book I tell you how to store them and what we’re going to do is just use a pinch of seeds instead of a whole packet. Remember the old-fashioned single-row antiquated method? The method that has you tear open a pack and pour it along a furrow that you’ve just made. Then, you put two stakes in and put string there and that’s where your row is going to be.

You need to keep a few notes in your Square Foot Garden. But we’re not going to have rows and we’re not going to plant a whole packet of seeds. What made me realize this was such a waste was when I counted the number of seeds in a packet. For example, leaf lettuce, it’s a small seed. It took a while to count them, but guess how many there were in a packet? I like to ask this in my lecture and go around the audience and people guess, “50? Oh, a hundred? 200?” and I say to you, “Do I hear 300?” Well, there are over a thousand seeds in a packet of leaf lettuce. Can you imagine a thousand seeds? More than that.

Even if you’re a family of rabbits you’re not going to eat a thousand heads of lettuce. So why do we plant them? Well, because that’s what we’ve always done. That’s what we’ve been told to do. Dan what do you have to do? You go back and thin them out. Why do you thin them out? You do it because the plants should be spaced about 6 inches apart for leaf lettuce.

I’m Not a Horticulturist

Now I want you to remember, I’m not a horticulturalist. I have no horticultural training whatsoever, other than having to dig up my mother’s garden, so I got to hate gardening. But, as an engineer and an efficiency expert, I look at everything with sort of a jaundiced eye of it. I always think about how to improve things.

I worked backwards and I said, alright, let’s pretend we did it the old-fashioned way and we planted a whole row, and now it says go back and thin to one plant every 6 inches. Well, the first thing you have to do, is figure out how far apart 6 inches is. You can judge it or guess but I usually lay down a ruler, a yardstick. Then every 6 inches let’s find the best plant there and take all the rest out. Of course, when you’re taking those out near the one you want to keep, you’re going to disturb its roots. That’s not too good.

You know what happens with the others you take out – you start planting them here, there and everywhere. You end up with so many plants you don’t know what to do when they get big and you have to harvest them. Most of them will go to waste. I thought, if we are going to thin to 6 inches apart, why don’t we just plant 6 inches apart? Whoa! Who ever thought of that? I’ve got my yardstick there and when I’m still doing single-row gardening experimenting I just planted a couple of seeds every 6 inches. Well, I got to the end of the row and I had a whole lot of seeds left. Well, then I thought, “Why do I have to throw them away? Can I save these?” I studied as to what you need to save seeds for next year, and the next year. Well, that turns out to be very simple. You just again go backwards and you say, “What does it take to sprout a seed?” Well, it takes two things. No, it’s not sunlight – it’s not light at all. It’s warmth and moisture. Well, let’s store them then till next year in something that’s cold and dry. Ah-ha – the refrigerator! Put them in a Ziploc bag or a screw-lid jar and put them in the refrigerator. And I found out that they will be good next year, and the year after, and the year after. Some seeds will last up to 10 years if you store them properly. See how simple Square Food Gardening is?

Getting Rid of Rows and Fixing Plant Spacing

I got rid of the rows and went to the squares, then it’s still a matter of putting just a pinch in each location. They are already spaced 6 inches apart or 4 inches apart. Whatever you do, remember our spacing in SFG is 1, 4, 9 or 16 plants per square foot. It is very easy to get that spacing. You don’t even need a ruler if you’ve got a grid, and every Square Food Garden has to have a grid.

Now, you need to know how many seeds there are in a pinch. Well, when the seeds are new, the seed companies guarantee something like 95 percent germination. If that’s true, then you could plant a 100 seeds and 95 would sprout. But we’re only going to plant a pinch, so if you put in 2, certainly both will sprout; maybe occasionally, only one would sprout. But most people just can’t put in one seed and there’s even difficulty putting in two seeds. So then, I’ll just put in a few more. So, we defined a pinch as 2 or 3, no more…please, no more because then you’ve got the same problem that single-rowers have. What do I do with the extra seeds? Well, I thought we’ve got to find a better way than to try and dig them out, disturb the one good one and try and transplant these somewhere.”

I thought, let’s take one of our tools; remember there’s only three tools in Square Foot Gardening: a trowel, a pencil and a pair of scissors. Take the scissors; pick the best one – if three of them sprouted from your three seeds, pick the best looking one – and you snip off the other two. That’s it – you don’t disturb the good one.

Wasn’t that easy? It’s done with. There’s no work to it, and you don’t disturb the ground and you don’t disturb what you’re saving. Now, you then store your seeds in that Ziploc bag in the refrigerator. If you’re going to replant in a couple of weeks, you just take it out, take what seeds you need and put it back in the refrigerator. Next year, or next fall – whatever the season is – those seeds are waiting for you, and they’ll be good.

The experts will say, well, they decrease in ability to sprout. So, if they were down to, let’s say, instead of 95% only 50% and you still planted your pinch of two seeds, one of them would sprout. If it goes even below 50% and they’re getting quite old, you might then put in three or four just to make sure at least one would sprout. But you still got to cut off the extra ones – don’t plant so many seeds that you’re tempted to dig them up and transplant them somewhere. That’s quite a shock to all the plants, don’t do it.

How much money can you save by not buying seeds every year? Whoa – I’m going to get in trouble with the seed companies. Nothing wrong with them; they turn out wonderful seeds, they have wonderful catalogs, they’re just nice people – but I don’t think we should spend 5, 10, 15, 20 dollars every year when we don’t have to. Let’s be practical, let’s be common sense, let’s be kind to the environment. Only buy what you’re going to use, and use only what you really want.