Who Needs SFG the Most? 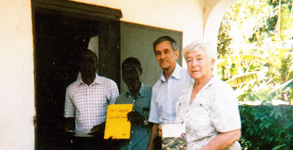 Haiti would certainly be right up there.  The different times that I have been to Haiti I kept finding neighborhoods that were even poorer than I could imagine.  But you know something?  They all seemed happy.  They wore brightly colored clothing.  Kids were playing in the street and laughing.  I couldn’t believe it.  And they all wanted to garden and they could understand the principles of SFG right away.  The problem was that they don’t own any land, they don’t have any tools and they don’t have any money.

I could see where SFG was going to fit right into that picture.  We built smaller boxes with scrap plywood bottoms, carried them into the house at night.  They were filled with homemade compost and very few seeds were needed to get started.  The nighttime movement was to protect the garden from anything that moved at night, including goats, bugs, neighbors, you name it.  We tried something else with those that did have a house and we placed the gardens on the roof and built a small ladder out of scrap lumber we found at the dump.  At night they just took the ladder down.

Because everyone was hungry, they were willing to eat just about anything we could grow.  So there weren’t any fussy eaters that say, “Oh, I don’t eat that!”  This method was working in the city, out in the country and just about anywhere people were living.  Surprisingly there was a lot of material to go in the compost pile.  As you know, any plant material that was once living is suitable to be composted.  Being in a tropical area, there is plenty of that in Haiti.

Will this work?  It’s a start.  It’s better than standing in line for hours waiting for some humanitarian organization to ship in boxes of food and the only solution to that is to go hungry until the next shipment comes in.  That’s why we believe in the parable of teaching a man to fish.  We just change it a little bit and we teach the women how to garden.

Why just the women?  If you asked them, “Would you like to improve the nutrition of your children?” we know the answer right away.  A man will say, “Well, what do I have to do?” so that’s not a receptive situation.  I don’t have anything against men.  Their role in life is to provide and protect.  The mother’s role is to care – and they do all over the world.

Pat and Connie (pictured above) have been doing humanitarian work in Haiti for many, many years and if you’d like to learn more about them – or support their mission – here’s a link to their website for lots of pictures and interesting information: Gardening Worldwide.

There are many other countries I’ve been to that I would like to tell you about in future blogs, so come often and let me know what you think!